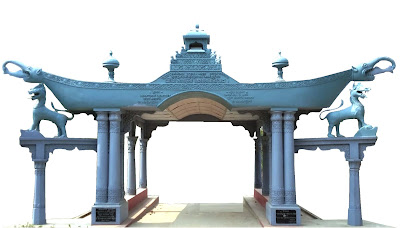 This article tries to explore the meaning, importance, and socio-cultural relevance of Karapat, an entrance gate of Satras- the Vaishnava Monastries in Assam, especially those which are located in the heart of Majuli Island; the largest riverine island of the world. Mājuli was one of the nerve centers of the Neo-Vaisnavite Movement during its heydays. It was at Mājuli (then known as Dhuwāhāt, Āhom territory) that Mahapurusha Srimanta Sankaradeva met his foremost disciple and apostolic successor, Madhavadeva for the very first time, in the 16th century. This event referred to as Manikānchan Sanyog is the single most epoch-making event in the history of the Neo-Vaisnavite Movement. After this meeting, the Neo-Vaisnavite Movement gained momentum and the medieval Caritas (the hagiographies) are full of references to Mājuli. It is said that Sankaradeva established the first Satra here by planting a Bilva tree and naming the place Belguri. Here it was again that Sankaradeva’s son-in-law Hari, was executed under royal orders. Sankaradeva stayed at Dhuwāhāt for 14 years before proceeding to Western Assam1.
In the post-Sankara-Madhava period (17th century onwards), Mājuli once again became one of the main centers of propagation of Neo-Vaisnavism due primarily to the pioneering efforts of Saint Vamsigopaladeva and his successors. An attempt has been made to bring out the exquisite artworks endorsed in these superstructures that aesthetically presents meaningful expressions of Vaishnava worldviews.

Karapat
A decorated massive gate-like structure that stands at the entrance of Satra- a Vaishnava Monastery, is generally referred to as Karapat. It is regarded to have been deeply associated with the Vaishnava concept of Bhakti or devotion. The structure adores many symbolic motifs of mythical figures, material objects of ceremonial importance, gestures of Satriya Nritya (Satriya Dance), scriptures, and floral decorative elements with elaborate cultural meanings. Karapat from one Satra to the other may structurally differ in terms of their architectural patterns but the core meaning of the use of Karapat as a devotional entity remains the same. In the In Assamese dialect, the literal meaning of Karapat is to fold or join hands (Kar means hand and Pat mean to join), connoting an act of prayer. Hence, the underlying meaning of the Karapat is Bhakti or an adoration similar to the gesture of hand shown at the time of Prayer.  Karapat in its earliest form which was prepared by wood, bamboo, and cane structure could be referred from the manuscripts or ancient literature. Although, those structures of the 15th or 16th Centuries have transformed into a concrete structure, one can still find the elements of these ancient but massive wooden structures of pillars, existing in the Namghar of Majuli Satras even today2.
The Karapat Structure appears like an entrance gate with massive vertical pillars aligned at to lateral sides joined by a big column together providing an open space of entrance. These pillars and columns adore beautiful sculptures or motifs of human, animal, floral, ceremonial objects, and mythical figures. In some Karapat they are attractively painted while some other Karapat appears to have been painted with a single colour. Some Karapat features with an additional extension of a roofed structure at the rear end while some do not prefer to give this extension.

Kamalābāri was established by the Padma Ātā in 1595-1625 AD in the orange-garden of a devotee (kamalā=orange; bāri=garden). Padma Ātā is also known as Badalā Ātā, as he was sent to eastern Assam by Madhavadeva on his behalf (badal=exchange, on behalf). He is considered the juniormost of the apostles of Madhavadeva. He was posted by Madhavadeva in the eastern country, that is, the Āhom kingdom. He stayed at a place called Kalānibheti and started preaching but due to persecution from the royal quarters, he shifted from place to place till at last, he built the Kamalābāri Satra in Mājuli in the orange grove of an officer, Purusottama Baruwa.

Padma Ātā nominated his Brahman disciple, Srirāma to the Adhikārship of the Kamalābāri Satra and passed away in that monastery. The Satras following the leadership of Kamalābāri call themselves Madhupuriyā Sampradāy, being intimately connected with the Madhupur Satra of Koch-Behār3.
The present Karapat of Kamlabari Satra was constructed in the last decade of the 20th Century when the current Satradhikar (head of the Satra), Sri Narayan Chandra Goswami assumed this prestigious post of the institution. Before the present structure, it was made of wood, bamboo, and cane materials embodying all those elements essential and relevant to the Satra.


Sorai is an object used for ceremonial purposes.
It expresses the symbol of welcome and blissful
honour and hospitality.
When guests visit the Satra, he is welcomed
by the fragrance of burning incense on
Sorai as a mark of honor.


The figure of a Lion overpowering an Elephant is widely seen in Assam. In Vaishnava Philosophy, this regal statue represents the strength and power of Naama (reciting the holy name). Naamasingha is an expression that represents the name of Lord whose, divine power and benign presence are ever supreme to all the supremacies. The symbol of Naamasingha gives the moral that the name of the lord is like a powerful Lion in the jungle who can even overpower the mighty elephant. When the Lion roars, every creature drove to silence. Therefore, Mahapurush Shrimanta Sankardeva, the founder of neo-Vaishnava in Assam conjugated this highly expressive symbolic statue to the power of Naam Bhakti (the devotion of reciting the name of Lord). Naamsingha is a prominent attraction of the Karapat and a symbol of Vaishnava culture of the Satras of Assam.

Khelnao:  the horizontal column of the Karapat in Kamlabari Satra of Majuli, Assam is represented by the structure of a Khelnao (a boat used as a speedy transport or for boat race4). According to Sri Prafulla Barua, a native of Majuli Island and Bhagat of the Kamlabari Satra, “the representation of Khelnao on the column of Karapat of Kamlabari Satra is also linked with the concept of Naama Bhakti (an adoration with the recital of the Lord). If we take Khelnao (boat) as the Earth sailing on the time of a cosmic ocean, nobody knows when it will sink to the depth and fall in the mouth of deadly creatures (evil). The use of Khelnao in the structure expresses that humans can overcome the sin of the world by devotion to the name of the Lord which sails to protect us and to reach the heavenly life.

The lateral ends of Khelnao has symbolic figures showing a Crock a creature swallowing half the body of a fish. The fish symbolizes the human whose mistake may befall into the mouth of deadly creatures (sin) and Bhakti (devotion) with the name of Lord like Khelnao is the only path to the truth and bliss”. 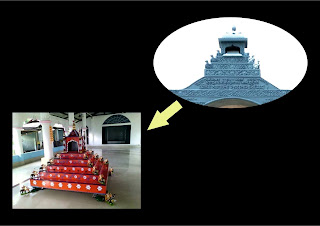 Singhasan: Inside the Naamghar (Prayer Hall) of the Satra (Vaishnav Monastry), one can find the installation of a huge Singhasan, a multi-tiered colorful wooden structure decorated with colorful paintings. It is an altar where the sacred scriptures of the preaching of the Lord are kept and worshipped. Among all the Satra symbols, Singhasan is believed to have carried the highest Bhakti of all the recitals of the Lord. The feet of Singhasan are shown with the figure of Tortoise which according to the Hindu belief is a representation of the Earth. It symbolizes that the Bhakti or the name of the Lord is above all and supreme. Every creature on the earth and universe is ruled by him. The seventh tiered Singhasana also represents ‘Sapta Baikuntha’, seven celestial abodes of the Lord. If it is five-tiered, it represents Kalpa Taru.

Karapat Artists
The art of sculpting, painting, weaving, etc. is an indispensable practice of the Satra institution. Some Satras specialize in the making of masks while others may have their specialization in basket making, bell metalwork, painting, dancing, singing, etc. The efficient and skillful Bhagats/ artists or sculptors from the locality were engaged with renowned Shilpakars who prepares Karapat for Satras in the ancient time. They handed down this valuable art form to the succeeding generations. With the passage of time, the preparation of Karapat has also been seen to be an excellent architectural design and perhaps it is the reason that designs of Karapat have moved beyond the traditional gate of the Satras. The architectural elements of this Satra tradition are widely used as an icon in many new forms of buildings and modern architecture in Assam.

Replica of a Karapat in IGRMS (the National Museum of Mankind)


The Indira Gandhi Rashtriya Manav Sangrahalaya, Bhopal (National Museum of Mankind) in India has initiated to construct of a replica of this unique structure as an entrance Gate No. 2 of the Museum premises. Experts and traditional artists from Assam were invited to construct the Karapat similar to that of the Kamlabari Satra of Majuli. Visitors from across the world can see this architectural form and the artwork in the museum premises. The work for the construction of Karapat in the museum started in the month of June and July 2019.

Conclusion
The Karapat cannot be merely seen as an architecture of the Vaishnava religious sect in Assam. It carries meaningful expressions of human creativity evolved with an institutionalized socio-cultural life of the people of this great land. Although, the symbols used in Satra tradition appears to be religious; it is widely accepted by all sects of people in Assam as their integral part of livelihood. 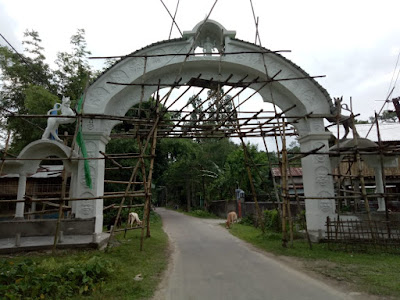 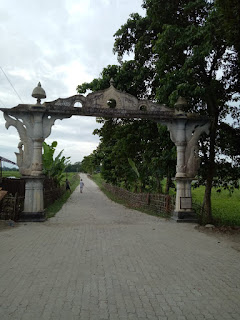 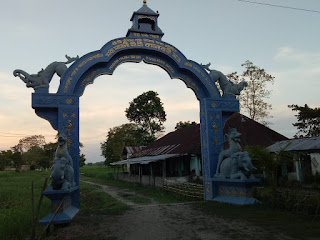 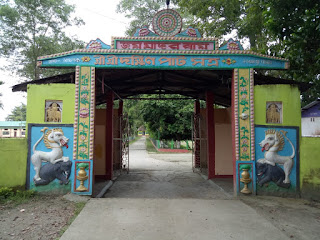 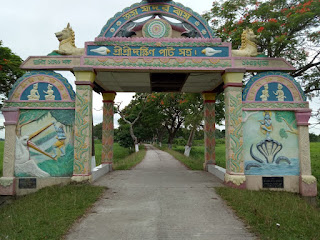 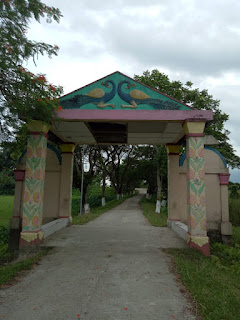 Posted by Shakmacha at 3:05 AM

One of the best anthropological work on the Karapat. Elaborated and excellent documentation.

This blog shares some of the interesting aspects of Museum Research Activities, accounts of anthropological field work, interviews and articles for the readers especially the students of anthropology, social sciences and other sister disciplines. The contents in the blog, I believe would be helpful.

You are Viewer No.

Blogs that I admire